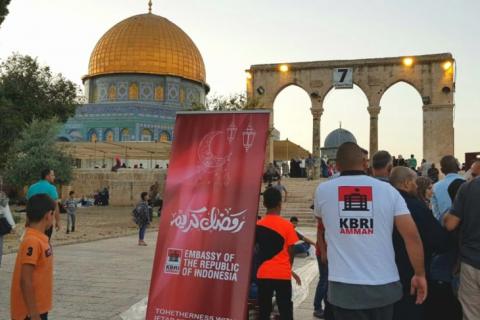 "Around 127 Jewish settlers broke into the holy compound this morning," Firas al-Dibs, a spokesman for Jerusalem Islamic Waqf, a Jordan-run organization responsible for overseeing the city`s Islamic sites, said in a statement.

According to the Jerusalem Islamic Waqf, settler incursions -- which began in 2003 -- into the holy site have seen a remarkable increase this year.

For Muslims, the Al-Aqsa represents the world`s third holiest site. Jews, for their part, refer to the area as the "Temple Mount", claiming it was the site of two Jewish temples in ancient times.

Israel occupied East Jerusalem, where the Al-Aqsa Mosque is located, during the 1967 Middle East War. It annexed the entire city in 1980, claiming it as the capital of the Jewish state in a move never recognized by the international community.

Jerusalem remains at the heart of the decades-long Mideast conflict, with Palestinians hoping that East Jerusalem might one day serve as the capital of a Palestinian state. (Masdar)
Tags: Palestine
Bagikan: