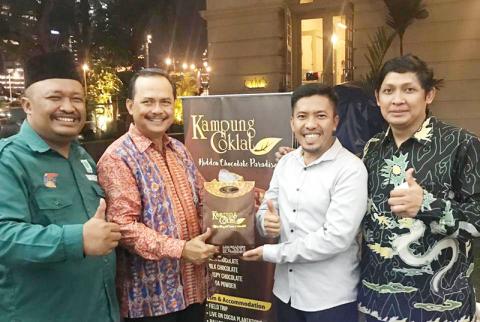 Economy
Economy
Bagikan:
Singapore, NU Online
As many as 18 Small and Medium Enterprises (SMEs) from Indonesia took part in the SING Design Bazaar in the Empress Place area, the Asian Civilization Museum, Singapore.

While 17 other SMEs offered a variety of products consisting of fashion, jewelry, handicraft, light-furniture, coffee, and soft food and beverages.

This Indonesian SME Product Exhibition was held from 21-23 December 2018 and was a commitment of the Indonesian Ambassador to Singapore, Ngurah Swajaya to encourage market access in Singapore for SME products fostered by Bank Indonesia and the Ministry of Trade.

In 2018 RI SING Design Bazaar moved after the Asian Civilization Museum offered a prestigious Empress Place area in the center of the City of Singapore. The location is specially designed in contemporary tents in the middle of Singapore's financial center skyscraper buildings.

"The three key successes that must be considered by SME entrepreneurs, namely, the use of technology, innovation and quality, and the cooperation network, and these three factors are offered at RI SING Design Bazaar," he said.

He also hoped that this bazaar would not stop at just exhibitions and direct sales to take advantage of holidays at the end of the year. Rather, it could also be used to establish ongoing interaction and cooperation.

"Our goal is to use contacts to become contracts, and at the same time using Singapore as a relationship to penetrate markets outside Singapore, including within the framework of the ASEAN Economic Community (MEA)," Ambassador Ngurah said.

On the first day of the RI SING Bazaar, there were several inquiries from Singaporean business people, including coffee and black tea. One participant also offered livestock products, such as eggs and fish from Blitar, East Java. They even expressed their readiness to supply eggs produced by Blitar to Singapore.

"We are ready and agrees with what the Ambassador said as long as the price of the eggs will side with the chicken breeders whose prices have always been mocked in a cartel," the head of LPNU Blitar Abdul Aziz said.

He added, Singapore for this need had so far been supplied by Malaysia and currently the two countries seem to be less harmonious and the Ringgit country has decided to stop supplying those needs.

"If that happens, Indonesia, especially LPNU Blitar will be ready to take over the needs of eggs and fish to Singapore, if Malaysia has stopped supllying the basic needs of Singapore," Aziz said.

"We have coordinated with the Regent of Blitar and BI Kediri and both of them are very supportive," he concluded. (Imam Kusnin Ahmad / Masdar)
Tags: Economy
Bagikan: