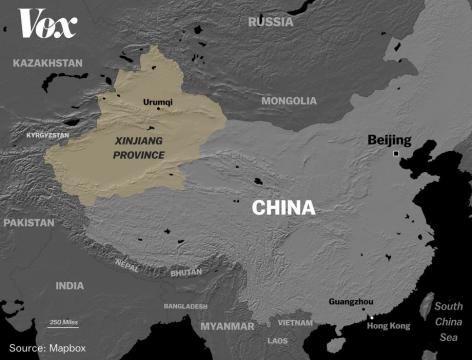 Photographs of victims, records of closed-circuit television (CCTV), firearms, sharp weapons, and hand-made guns and bombs were kept and displayed in the building.

"We began the construction of the display room since 2014, and it began operations in December," Deputy Director General of Publication of the China Communist Party for the Xinjiang Regional Committee Shi Lei informed Antara here on Thursday.

However, Shi said, the exhibition building was not opened to the public to avoid negative impact on the locals, especially juveniles and those from the working-age group.

"If there are certain communities, including the world`s human rights organizations, we will surely be glad to accept them," he remarked.

The exhibition hall is expected to end the polemics on Uighur and answer global questions on the issue.

The authority displayed photographs and videos on violent attacks not only in Xinjiang but also in other regions in China, including in Kunming, Yunnan Province, and an attempt of suicide bombing in Beijing.

Pictures of victims are displayed around the large wall of the exhibition, with some parts of them being blurred. In some corners of the hall, they roll video clips on violent attacks in various places, such as the police station, government offices, roads, market, mosque, and other public places.

Hundreds of sharp weapons, firearms, and hand-made bombs seized by the authority from the attackers are also displayed in the hall.

Photographs and videos of the attacks in Xinjiang have shown that some victims of the attacks were the Uighurs living in most areas in the province bordering with Mongolia, Russia, Kazakhstan, Tajikistan, Kirgizstan, and Pakistan.

"As you see, there were an imam of a mosque and his family as well as some police personnel, who fell victims to the series of terrorist attacks in Xinjiang," he stated.

Hence, Shi emphasized that the 23 years of violence in Xinjiang could not be linked to a certain religion or ethnic group, and the local government`s crackdown measures did not target a certain ethnic group, religion, or race.

"All forms of terrorism are crimes, as terrorism and radicalism in Xinjiang did not select their targets from a certain ethnic or religion," Shi stated.

The United Nations and several Western countries have highlighted the Xinjiang government`s measures against the Uighur ethnic group.

They accused China of violating human rights, especially on the issue of the re-education camp that China calls as a "Vocational Education Center."

The Chinese authorities also refused to give German Human Rights Commissioner Barbel Kofler an access to the camp in early December 2018.

As revealed in its official website, Amnesty International reported that China has continuously conducted repression under "anti-separatism" or "counter-terrorism" campaigns in the Xinjiang and Tibetan-populated areas.

In a statement that it released on Sept 24, 2018, Amnesty International estimated that there were up to one million Uighur Muslims being held in what it called "internment camps in Xinjiang".

The organization, which supports a global movement for campaigning human rights protection, urged Beijing to "end its campaign of systematic repression and shed light on the fate of the Uighur Muslims arbitrarily detained in XUAR.

In a report that it submitted to the United Nations Committee on the Elimination of Racial Discrimination`s 96th session in August 2018, Amnesty International had ever urged China to "respect and ensure the rights of Tibetans, Uighurs, and other ethnic minorities to freedom of opinion and expression, peaceful assembly, association, movement, and religion and belief, as well as respect for their distinct culture, language and traditions."

Beijing`s alleged human rights abuses against the Uighurs in XUAR have triggered demonstrations in different parts of the world, including Indonesia.

Hundreds of Indonesian Muslims staged a peaceful rally in front of China`s embassy in Jakarta on Dec 21, 2018 to echo their demands for justice and freedom of the Uighurs.