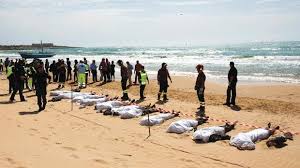 Turkey
Turkey
Bagikan:
Ankara, NU Online
Turkey on Sunday slammed the international system for failing to address the international migration issue and its tragic consequences, including over 100 migrants who just died in the Mediterranean Sea.

"The international system, by staying silent in the face of this persistent drama and failing to find a solution, is the modern face of barbarism," Turkish presidential spokesman Ibrahim Kalin said on Twitter.

Kalin cited the death Saturday of some 117 irregular migrants after the boat carrying them sank off Libya.

After the incident, Italian President Sergio Mattarella expressed his "deep sorrow for the tragedy that has taken place in the Mediterranean."