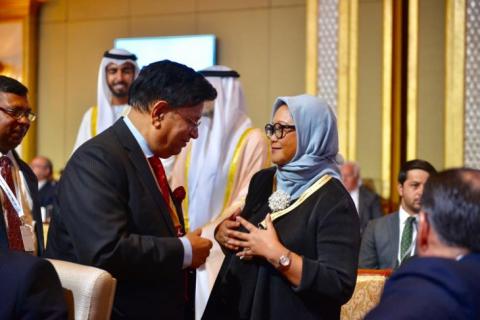 OIC
OIC
Bagikan:
Jakarta, NU Online
The Organization of Islamic Cooperation (OIC) member countries have no other option but to provide solid and concrete support to Palestine, according to Indonesian Foreign Minister Retno Marsudi.

"I want to remind the OIC members about our unfinished work, which is the Palestinian issue, (considering) the situation is getting worse," Marsudi remarked at the 46th OIC Council of Foreign Ministers meeting held in Abu Dhabi, the United Arab Emirates (UAE), recently.

In a statement released by the Foreign Ministry on Saturday, Marsudi encouraged all OIC members to support the struggle of Palestinian people to achieve their independence.

Indonesia, as a non-permanent member of the UN Security Council, will continue to provide its full support for the Palestinian cause.

One of the concrete measures taken by Indonesia to help Palestinian people is by providing financial assistance to the United Nations Relief and Works Agency for Palestine Refugees in the Near East (UNRWA) for desalinating water facilities in Gaza as well as conducting capacity building program for Palestinian women refugees in Jordan.

Marsudi will deliver the assistance to the UNRWA Headquarters in Amman, Jordan, after the OIC meeting wrapped up.

"The only choice for the OIC is to strengthen solidarity and concrete support for Palestine," Marsudi noted.

The OIC meeting is held at the Emirates Palace Hotel, Abu Dhabi, on March 1-2, 2019, under the theme "Fifty Years of Islamic Cooperation: Roadmap for Prosperity and Development."

At the meeting, Bangladesh handed over the chairmanship of OIC CFM to the UAE. The meeting will also ratify more than 130 draft resolutions related to OIC cooperation on various issues.

During the meeting, the Indonesian government submitted three draft resolutions related to the establishment of the OIC Contact Group for Peace and Dialogue, Islamic Office for the Boycott of Israel, and the Global Pact on Migration.

In addition, the Indonesian government submitted an annual resolution draft regarding the first meeting of the OIC Medicines Supervisory Board that was held in Jakarta in November 2018 as well as Indonesia`s role and assistance to help handle the humanitarian crisis in Rakhine State, Myanmar. (Antara/Masdar)
Tags: OIC
Bagikan: