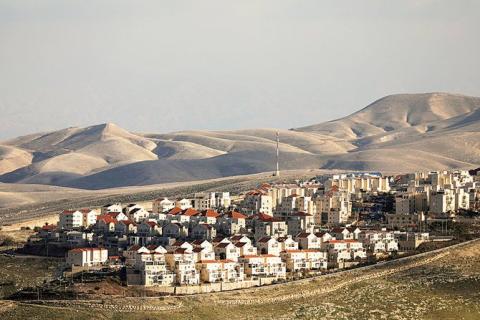 “Any measures and any announcements will not change the facts. Settlements are illegal and they will be removed,” a spokesman for Palestinian leader Mahmoud Abbas said.

Netanyahu said in a TV interview he would “apply Israeli sovereignty” to the West Bank. “I don’t distinguish between settlement blocs and isolated settlements,” he said.

Settlements built on land occupied by Israel in the 1967 war are illegal under international law and are a barrier to peace.

Many in Israel dismissed Netanyahu’s pledge as an empty campaign promise before Tuesday’s elections, to be ditched if he wins, but Palestinian activists believe the Israeli leader is newly emboldened by support from US President Donald Trump.

“His declaration is not just in the heat of ... electioneering campaigns,” said Palestine Liberation Organization official Hanan Ashrawi. “This is the end of any chance of peace.”

Saeb Erekat, secretary of the PLO’s executive committee, told Arab News: “Such a statement by Netanyahu is not surprising. Israel will continue to brazenly violate international law for as long as the international community continues to reward Israel with impunity.”

Erekat said the Trump administration’s recognition of the annexation of the Golan Heights had emboldened the Israeli leader to continue violating Palestinian rights.

“We’ll continue to pursue our rights through international forums, including the international criminal court, until we achieve our long overdue justice,” he said.

The Palestinian Authority “cannot be sustained” if Netanyahu wins on Tuesday, Erekat said.

“It may have to do a disappearing act,” he said. “Netanyahu … wants a Palestinian Authority, but without any authority.”

Riad Malki told The Associated Press on the sidelines of the World Economic Forum in Jordan that Prime Minister Benjamin Netanyahu’s pledge was likely aimed at rallying his nationalist base in the final stretch of a tight race.

He added that Palestinians would “resist” such a policy if carried out.

“If Netanyahu wants to declare Israeli sovereignty over the West Bank, then you know he has to face a real problem, the presence of 4.5 million Palestinians, what to do with them,” Malki said.

He said Israel cannot expel the Palestinians. “We will stay there,” he said. “Then you know the international community has to deal with us.”

Malki accused the US of encouraging Netanyahu by recognizing Jerusalem as Israel’s capital and more recently, recognizing Israel’s annexation of the Golan Heights.

Sergey Lavrov, Russia’s foreign minister, also expressed concerns about America’s “illegitimate decisions” in the region. “We see the solution in dialogue between countries, because unilateral actions will never lead to anything good,” he said.

Netanyahu has promoted Jewish settlement expansion in his four terms as prime minister, but until now refrained from presenting a detailed vision for the West Bank, viewed by Palestinians as the heartland of a future state.

It would mark a dramatic shift for Netanyahu, ahead of Tuesday’s balloting. Annexing settlements would all but end any final chances for a two-state solution with the Palestinians and potentially push the sides toward a single, binational state.

The main challenger to Netanyahu in Israel’s elections on Sunday condemned the premier’s deeply controversial pledge to annex West Bank settlements, calling it an “irresponsible” bid for votes.

Netanyahu said late Saturday he planned to apply sovereignty over at least parts of the occupied West Bank, a move that could prove the death knell for the two-state solution to the Israeli-Palestinian conflict.

His remarks were widely seen as an appeal to right-wing voters ahead of what is expected to be a close election on Tuesday.

Benny Gantz, the former military chief whose centrist Blue and White alliance has posed a stiff challenge to Netanyahu, condemned the premier’s remarks in an interview with Israeli news site Ynet.

“Why not ask how in 13 years Netanyahu could have annexed and didn’t?” said Gantz, in reference to Netanyahu’s time as premier.

“I think that releasing a strategic and historic decision in an election campaign bubble is not serious and (is) irresponsible.”

“We said we will strive for a regionally and globally backed peace agreement while maintaining our basic principles,” he said.

Those principles include keeping security control of the Jordan Valley, parts of which are in the West Bank, and maintaining the large settlement blocs in the West Bank. Gantz has in the past signalled openness to withdrawing at least some settlers from other areas.

He labelled Netanyahu’s remarks as “a meaningless statement”.

“It’s a shame to play with people like that,” he said.

Turkey on Sunday criticized Netanyahu as “irresponsible” for saying he would annex Israeli settlements in the occupied West Bank if he wins Tuesday’s election.

“Prime Minister Netanyahu’s irresponsible statement to seek votes just before the Israeli general elections cannot and will not change this fact,” Cavusoglu tweeted.

Netanyahu, asked why he had not declared Israeli sovereignty over large West Bank settlements as Israel has already done in the occupied Golan Heights and East Jerusalem, said he was already discussing the move.

Turkish President Tayyip Erdogan’s spokesman echoed those charges on Sunday. “Will Western democracies react or will they keep appeasing? Shame on them all!” Ibrahim Kalin tweeted.

The Palestinians and many countries deem settlements to be illegal under the Geneva conventions that bar settling on land captured in war. Israel disputes this, citing security needs and biblical, historical and political connections to the land.

Palestinians want East Jerusalem to be the capital of a future state they are seeking. Peace talks with Israel have been frozen since 2014. (AP/Masdar)
Tags: Palestine
Bagikan: