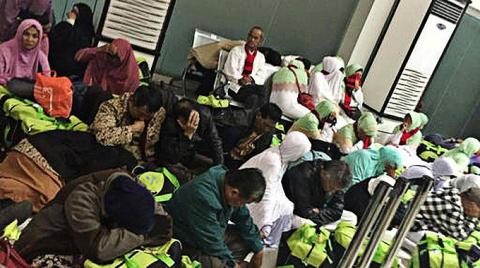 Hajj
Hajj
Bagikan:
Riyadh, NU Online
The call of Allah to come to "Baitullah" (the house of God) in the month of Hajj is priceless. If Allah has decided, even a scavenger is made capable of performing Hajj, which requires abilities in all aspects, including health and economics, Antara news agency reported.

The scavenger is a seventy-year-old person named Miskat. He is registered as a prospective pilgrim departing to the Holy Land under the flying group 28 from Probolinggo District, Central Java.

In order to achieve his dream of becoming a guest of Allah (the most glorified, the most high), Miskat only eats twice a day.

"I eat twice a day. I spend Rp3 thousand for one meal and sometimes Rp5 thousand," he said, adding that he saves the rest of the money for Hajj under a pile of clothes in a closet.

Miskat has been struggling since long to save money for Hajj. Until 2010, Miskat could only save Rp3 million from Rp15 thousand to Rp30 thousand that he earns every day by collecting used bottles, boxes, and scraps. The cost of Hajj pilgrimage reaches above Rp35 million (about US$2.5 thousand).

Although the money was insufficient to go for Hajj, Miskat took courage to meet Saiful, an owner of a Hajj Guidance Group (KBIH) in Probolinggo and expressed his desire to perform Hajj.

Accompanied by Saiful, Miskat enrolled in the Hajj pilgrimage with Rp3 million, plus some funds from the group.

A call to Hajj also comes to a married couple, Supandi and Arsi from Patemon Village, Situbondo, East Java.

Supandi, who earns a living by being a construction worker, only earns Rp55 thousand per day, while his wife, who helps him, is paid Rp50 thousand per day. In order to save money for Hajj, they only eat vegetables and salted fish every day.

Miskat, Supandi, and Asri will travel along with three million Muslims from all parts of the world, who perform Hajj in the Holy Land this year.

The three of them have never travelled far from home, let alone boarding planes and settling for more than a month in a country, which is located thousands of kilometers from their homeland.

This is a concern of the Saudi`s Minister of Hajj and Umrah, Mohammed Saleh bin Taher Benten, who revealed that among the pilgrims, there were those who have never been to major cities in their countries in their lifetime.

"They have not even been to a big city in their country. But they are able to come to the Holy Land to perform Hajj," Benten recently remarked during a meeting with media delegates from six countries who were covering the hajj preparations by the Government of the Kingdom of Saudi Arabia.

Hajj is the fifth pillar of Islam; therefore, pilgrims of diverse social, cultural, and economic backgrounds from different parts of the world take part in the pilgrimage.

Benten asserted that the Kingdom of Saudi Arabia welcomes and serves all Muslims who come to perform Hajj without distinguishing their backgrounds.

"We want to make Hajj and Umrah a journey without anxiety, worries, and discomfort. If you lose baggage, need medical care, or meet with an accident, all these problems will be immediately resolved," he asserted.

The Government of the Kingdom, as host of Hajj and Umrah, always makes every effort to make the journey of worship as safe and as comfortable as possible for all pilgrims, so that they will never feel they are in a foreign country.

"We want to make all Muslims feel that they are not in a different country or a strange place while performing Hajj and Umrah. This kind of thing will never be found elsewhere, because those who come to the Holy Land are not tourists, but the guests of Allah. They are in a hotline with Allah," Benten remarked.

He added that serving Muslims, who come from all over the world to perform Hajj and Umrah, is a duty and an honor of the Kingdom of Saudi Arabia.

"Those who come to the Holy Land have no political, economic, social, or other reasons, but simply want to worship because Hajj is one of the five pillars of Islam and mentioned in the Quran," the minister explained.

According to him, one of the obstacles that is often experienced by pilgrims is the difference in language. The minister explained that there are about 3.5 thousand officers who speak in different languages and are placed mainly in Arafat and Mina.

"With this effort, it is expected that language differences will no longer be a significant barrier," the minister remarked.

The minister further explained that the increase of Hajj and Umrah services for all Muslims is included in the Vision of Saudi Arabia 2030.

In this year`s Hajj season, the Government of the Kingdom has implemented Road to Makkah initiative for Indonesian and Malaysian pilgrims.

This initiative allows pilgrims to pass immigration procedures, including passport and visa checking, and fingerprint recording at Jeddah Airport as all the processes have been done at Soekarno-Hatta Airport, Jakarta.

Upon arrival in Jeddah, pilgrims also do not have to wait for luggage, as the officers will take care of them and shift them straight to their hotels.

Through the fast-track services, it takes only 15 to 20 minutes for pilgrims to get off the plane, take buses that dispatch them to hotels, and arrive in their rooms. Previously, the whole process could take 2.5 to 3 hours.

The Government of the Kingdom is also currently developing digital technology that can be used by Muslims in planning their hajj and umrah travel through mobile applications.

"Technology is a key factor. Everyone can access apps to book airline tickets, hotels, and transportation and even can apply Hajj and Umrah visas and get them very quickly through online applications," Benten added.

The minister further explained that a number of development projects are being undertaken by the government, one of which is a housing project in which more than 500 housing units will be built. "The project supports residential management plans during the hajj and umrah seasons," the minister explained.

In the transportation sector, the Kingdom is working on Haramain speed rail project, which will connect Mecca and Medina across Jeddah; King Abdulaziz International Airport; and King Abdullah Economy City (KAEC) in Rabigh, which is 453 kilometers long.

The transport mode, which can accommodate 60 million passengers per year, will improve transport services along with the roads, buses. and other facilities in an integrated way.

In addition, the Government of the Kingdom also builds a new airport with a special terminal for Hajj and Umrah in Jeddah, which cost US$35 million.

With all the development projects, it is expected the Kingdom can serve 4.5 million Hajj pilgrims by 2030, and 30 pilgrims for umrah every year, or about 3 million every month.

In the field of culture, the government is building Global Muslim Village, which is located about 40 kilometers from Mecca.

Through this initiative, Muslims from different countries can showcase their culture and typical dishes and may sell it along with cultural products such as handicrafts.

"Global Muslim Village is a place where Muslims from around the world know each other well," Benten revealed.