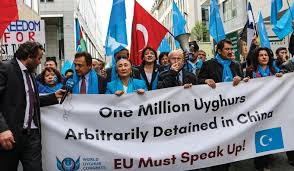 Up to one million Uighurs, a largely Muslim minority, may be held involuntarily in extra-legal detention in China’s far western Xinjiang province, according to estimates cited by the committee.

A former inmate in one of the interment camps said Muslims were forced to eat pork and drink alcohol, acts which are forbidden by their religion.

The UN Committee on the Elimination of Racial Discrimination issued its findings after a two-day review of China’s record, the first since 2009, earlier this month.

China’s foreign ministry rejected the allegations at the time, and said anti-China forces were behind the criticism of Beijing’s policies in Xinjiang.

It has never officially confirmed the existence of detention centres there.

China has said Xinjiang faces a serious threat from Islamist militants and separatists who plot attacks and stir up tensions between the Uighur minority and the ethnic Han Chinese majority.

The panel criticised China’s “broad definition of terrorism and vague references to extremism and unclear definition of separatism in Chinese legislation”.

It said the definition could be used against those peacefully exercising their rights and facilitates “criminal profiling” of ethnic and religious minorities, including Uighurs, Buddhist Tibetans and Mongolians.

In its conclusions, the panel said it was alarmed by “numerous reports of detention of large numbers of ethnic Uighurs and other Muslim minorities held incommunicado and often for long periods, without being charged or tried, under the pretext of countering terrorism and religious extremism”.

Chinese officials did not immediately comment on the panel’s criticism.

The independent experts said they regretted that there was no official data on people detained “for even non-threatening expressions of Muslim ethno-religious culture like daily greetings”.

During the review the experts said they had received many credible reports that around a million Uighurs are held in what resembles a “massive internment camp that is shrouded in secrecy”.

The panel expressed concern over reports of “mass surveillance disproportionately targeting ethnic Uighurs”, including through frequent police checks and scanning of mobile phones at checkpoints.

It also cited reports alleging many Uighurs who had left China had been forced to return to the country, and it called on Beijing to disclose their whereabouts and status.

On Wednesday, a bipartisan group of US politicians urged Washington to impose sanctions on Chinese officials responsible for abusing the rights of Muslims in Xinjiang, saying the region was being turned into a “high-tech police state”.

The UN panel urged China to allow Tibetans access to passports for foreign travel and to promote the use of the Tibetan language in education, the judicial system, and media.

The panel asked China to report back within a year on its main concerns. (Reuters/Masdar)
Tags: Muslims
Bagikan: