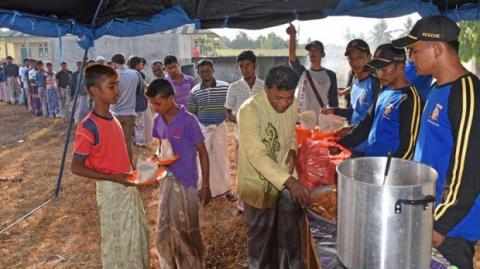 Rohingya
Rohingya
Bagikan:
Jakarta, NU Online
The Rohingya ethnic community that has sought refuge in Indonesia has expressed their gratitude to the government for its swift action to protect them through policies that openly welcome refugees.

"On behalf of my Rohingya community friends, I would like to thank the government of Indonesia for welcoming us," one of the refugees, Muhammad Zubair, stated in a discussion event entitled `Refugees in Indonesia; Threat versus Humanity`, held in Jakarta, over the weekend.

He admitted that he had been treated well as a human being during his stay in Indonesia, before being placed in a third country.

He felt secure while carrying out various activities in Indonesia, which he could not have done during his time in Myanmar.

"We are grateful for being able to regain the feeling of safety and security and for being able to perform our five-times-a-day prayer, shalah, as well as other activities. The leaders and government in Indonesia are very kind, we have not had similar experiences in our own country," he was quoted by Antara news agency as saying.

He further added that his presence, along with the other Rohingya refugees in other countries including Indonesia, is to seek refuge and not to impose threats on the safety of the country.

"We are neither radical groups nor terrorists. We came here because we needed protection, and we are grateful that the Indonesian government can provide that for us," Zubair, who had been staying in Indonesia for eight years, noted. (Masdar)
Tags: Rohingya
Bagikan: